Located a stones throw from Keswick, in England’s Lake District National Park, Underscar Manor is an Italianate property built between 1856 and 1863. Commissioned by William Oxley the house was designed by the famous architect Charles Reid with landscaping by Edward Kemp.

Boasting breath-taking views over Derwent Water the Manor house is situated close to some of highest mountains in England. The Scafells, with their rugged outlines of volcanic rock dominate the central area while Helvellyn and Skiddaw’s smoother slopes reflect the softer geology. These form an impressive background to the lower hills, or fells, and the beautiful valleys with their lakes below.

Used as a hotel in the 70’s the house returned to being a private residence in 2010 and in 2014 was purchased by current owner Jon Brown. Upon purchasing the property Jon and his team embarked on the enormous task of restoring and renovating the property, a task which involved countless hours of caring toil, mixing the most innovative 21st century technology with centuries age old craftsmanship to reinstate many of the historical features, whilst at the same time modernising property and secure its future for the next 200 years. 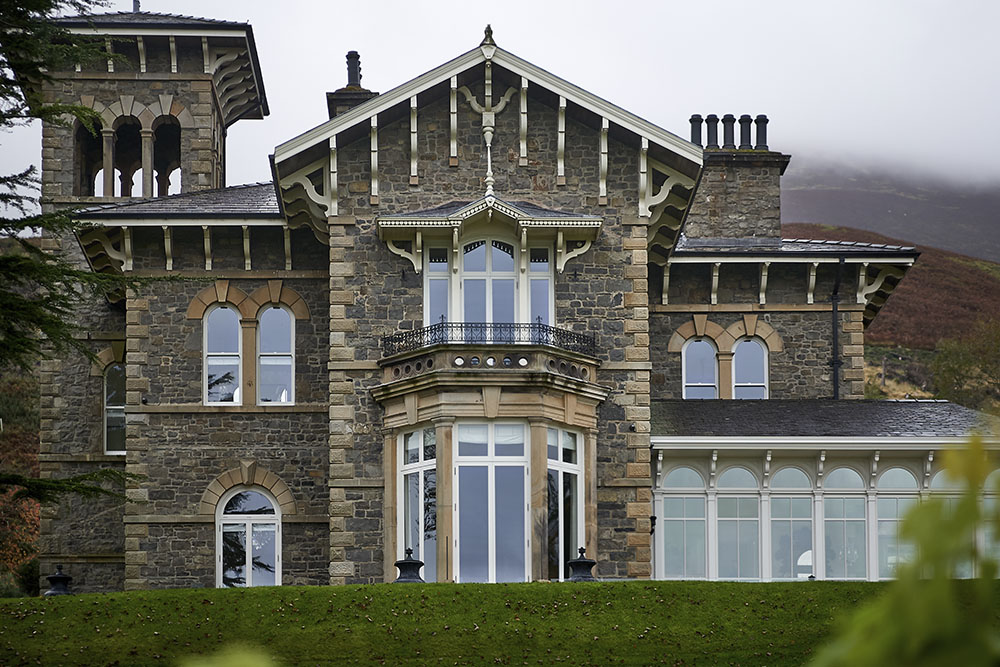 Jon’s vision for restoring the house to it’s former glory demanded it should be restored in the most lavish and fitting way. In 2016 he engaged Timothy Oulton Studio to design the interiors, including the supply of furniture and specialist feature items designed specifically for the project.

Underscar’s status as a grade-two listed building of special architectural and historic interest meant that there were strict rules when it came to restoring and preserving the original features and character of the building. That said there was also a need to modernise the spaces with plans to use the property for weddings, film and photoshoots as well as as a luxury retreat for guests. In order to achieve both goals, the interior approach was to keep the palate neutral and light but to introduce contemporary design elements that would breathe new life into each space.

This approach can be seen in the drawing room, which benefits from direct views over the lake. Here soft hued images, printed on linen panels, were integrated into the wall’s mouldings to create an ethereal panorama of the sublime Cumbrian landscape. Sailing out to the centre of the water, Studio photographed the full 360 panoramic view. The finished result takes inspiration from the dramatic exterior views interpreting them internally with a softness that is calming and that doesn’t detract from the natural beauty of the view. Contemporary features are also evident in the main bedrooms which were designed around Atoll, an island like bed design that is positioned in the centre of the room acting as an everyday retreat from the stormy world outside.

Meticulously covered in hand finished leather, Atoll’s curved lines merge from a sumptuous divan into a cantilevered desk with moveable lamps and concealed storage. The richly veined stone side tables are connected to the bed via slim brass arms, which can be adjusted as needed. This elegant and contemporary design showcases a high-level craftsmanship and attention to detail, finished in wrecked white leather it has a sculptural quality which references the ornate architecture of the house itself.